The container was picked up from the storage units on Monday, July 6.   The paperwork we had in hand indicated two weeks in transit.  Seems like a long time to go from Galveston to Colon.  A cruise ship could make it in a day or two I’m thinking.

A follow-up later from Panama indicated we should have the container on July 22.  What we actually got on the 22nd was a request for more money.  Something about fumigating and storage.    We made the deposit in the local branch and sent a copy of the deposit slip the same day.  The following day an email told us to expect a call on Saturday, the 25th, to discuss where to land the container.  On Friday, the 24th, we received a call that said the container was in Boquete!  We needed to find the driver and direct him to a landing spot.  Needless to say, we were a bit unprepared.  The guy and his brother that we were going to use for the unloading were off on another job.

We drove up to our neighbor’s place soliciting his aid.  He’s been here a number of years and knows his way around.  Also, he’s truly bilingual.  Not just a smattering of English or Spanish.  After considering the facts and the circumstances he recommended we talk to a local car repair shop owner.  He was known to have a large flat-bed wrecker that could unload the container “in two trips”.  I knew the guy from previous service work on our car and was well-pleased with him.  Turns out he was amenable to unloading and delivering our goods.  He wouldn’t give us a price as he didn’t know how long it would take.  But he would be “fair”.

Now we had to find the driver with our container.  He was a long way from where we were originally told he was, but we did manage to find him.  We drove to a landing spot recommended by our neighbor with the wrecker driver in tow.  It would be about 5 km from our home but we all agreed there would be nothing closer.  We live above and beyond a very winding and fairly steep road.

I was reasonably pleased with the first load of goods up to our place.  It took scarcely an hour to fill the flat-bed and get to our house. 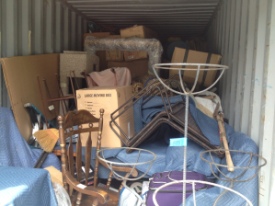 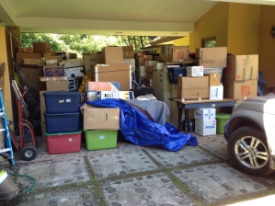 Unloading was a bit faster than loading.  By now word had gotten to Carlos, our young neighbor that handles all sorts of small jobs for us, and he and a cousin were up at the house when the first load arrived.  We asked the wrecker man if he wanted two more helpers, in addition to the one that he brought along, and he enthusiastically did.  It took not one more but two more loads on the flat-bed to empty the container.   And by the time they’d unloaded at our place, it was 7:30PM!  I don’t know where the time went.

The quality of the work was somewhat disappointing, but I guess it could have been worse.  Over  the years international symbols have been developed to get around language barriers and to accommodate, well, … the mentally challenged .  But sometimes it’s just to no avail. 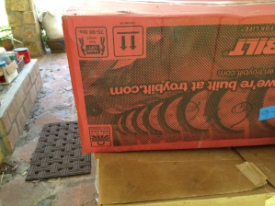 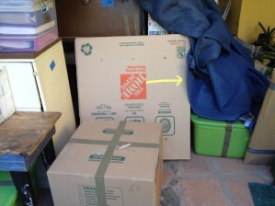